I have a new-found appreciation for cake decorators. The skill, time, imagination and creativity required to produce even the simplest of cake designs is unfathomable.

Yet, I – the one who cannot prepare a single dish in the kitchen without following a recipe; the one who has no idea what most ingredients in a recipe are or what the instructions actually mean; the one who burns herself every time she even turns on the oven – yes, I thought myself equal to the cake bosses of this world and decided that I could create a spectacular Fallout birthday cake for my son’s 13th birthday.

Surely, I have what it takes.

I searched Pinterest for a beginner’s level cake design. “This should be easy enough,” I thought.

(Apparently, I don’t know the definition of “beginner.”)

Then, I hit the grocery store for the necessary ingredients: cake topper, cake mix, frosting, gel icing and grey fondant.

Now this is where I should have stopped to reevaluate my plan. But noooooo, I simply grabbed some food coloring and went on my deluded way.

The plan was simple. The party was Saturday. We were to leave the house around 12:30 pm to begin the festivities. My mother-in-law would bake the cake Friday and I would put together the party bags on Friday evening after work.  Then Saturday, I would wake up early to decorate the cake.

Well, the party bags didn’t come together as quickly as I thought they would. I filled them with “goodies” from the Fallout game like “Sugar Bombs Cereal” (Goldfish Crackers), “Fancy Lads Cakes” (Hostess Cupcakes) and “Nuka Cola” (Coca-Cola) using templates for the food boxes and labels I found on Pinterest. Simple enough but I was up til 1:30 AM!

7:30 came very early Saturday morning – very early. But I had a cake to decorate so I dragged myself out of bed. I had lots to do but first things first:

After a few sips, I did a quick google search for instructions on how to turn white fondant grey. I found a short video that instructed me to place several dots of food coloring on a ball of fondant and then fold and fold the fondant til the color worked its way through. Easy enough. But by the time the color had worked its way through the entire 24-oz package of fondant, I ended up with an oversized wad of used, purplish-colored chewing gum that was sticking not only to my hand but everything it touched. (Sorry – no picture.  My hands were kinda stuck!)

After googling another video on how to make grey actually look grey, I finally got the purplish tint out of the fondant. Then using a whole lot of flour on my rolling pin, I was able to roll out the fondant into a big enough sheet to cover the cake. 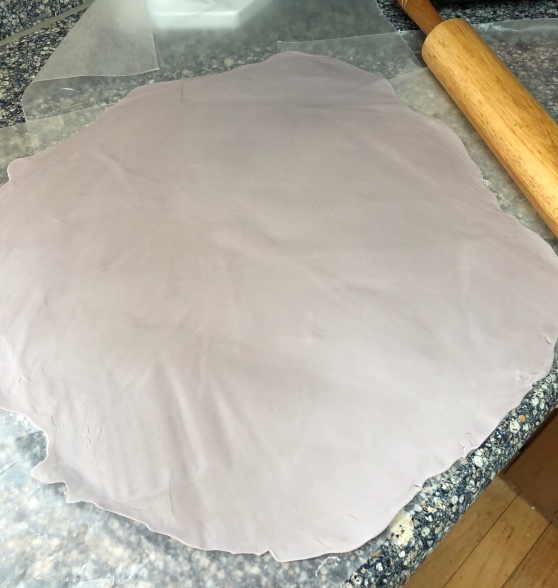 I gotta tell you. This was a feat for puny, little me. I really need to start lifting weights!

Next up, I stacked the previously baked cake layers, added a thin coating of icing so the fondant would stick (As sticky as it already was, I don’t think I needed this step!), carefully rolled the sheet of fondant onto the cake and cut off the excess. 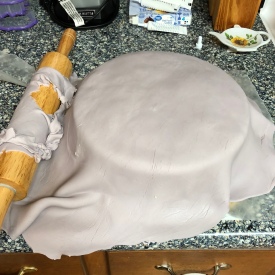 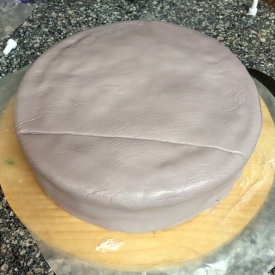 As I began the design, I looked back at the inspiration cake. Wait – my grey fondant was not dark enough!

It was 10:30 AM. What I should have done was shrug my shoulders and move on. But the perfectionist in me was screaming that it had to be darker.  All I could think to do was “paint” it with gel icing.

Bad decision. It turned out entirely too dark! 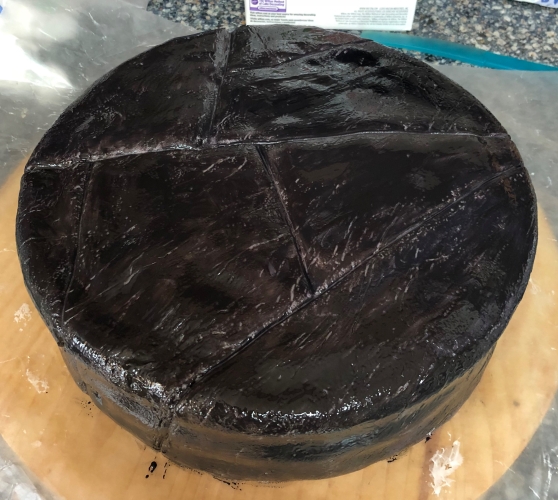 On to the details – the sprockets.

Warning: Cutting sprockets out of fondant is not for the faint of heart. Nor is it for the Christian trying her best to keep all of the Ten Commandments. Number three was shot around sprocket number 3! (Not really. Well. I did have to bite my tongue over and over again!)

No matter how hard I tried to cut out those neat little sprockets shown in that God-forsaken Pinterest pic, my sprockets ended up looking like – well – not like the picture!

Sigh. As I placed each sprocket on the cake, my hope of redeeming my Fallout birthday cake crumbled into pieces. 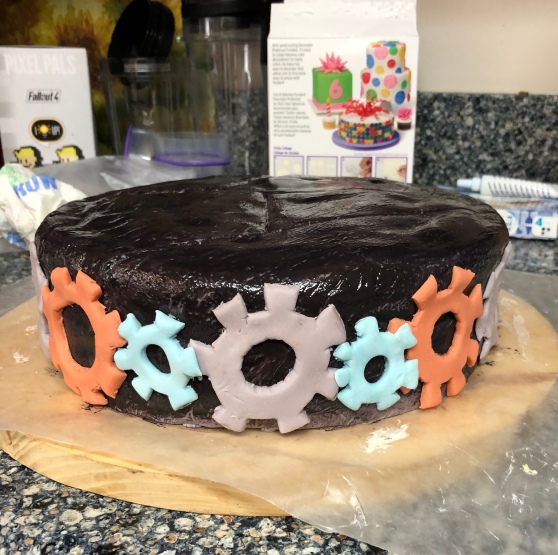 With very little time remaining, I grabbed the icing to write the message on the cake and my heart sank even further. The icing was black. And I did not have enough of a lighter color. Ugh! I wrote the message and added the topper.

At least the cake was finished.

I suppose, for a novice, I didn’t do such a horrible job. In fact, I even learned something from this agonizing experience – two important somethings to be exact:

No. 1 – I don’t have to be perfect all of the time. (Wow, that was difficult to write!) My kid loved the cake and that’s all that matters, right?

No. 2 – Fondant is the Devil. And if you plan on squaring off with the Devil, you better be packing a whole lot more than beginner level cake decorating skills! 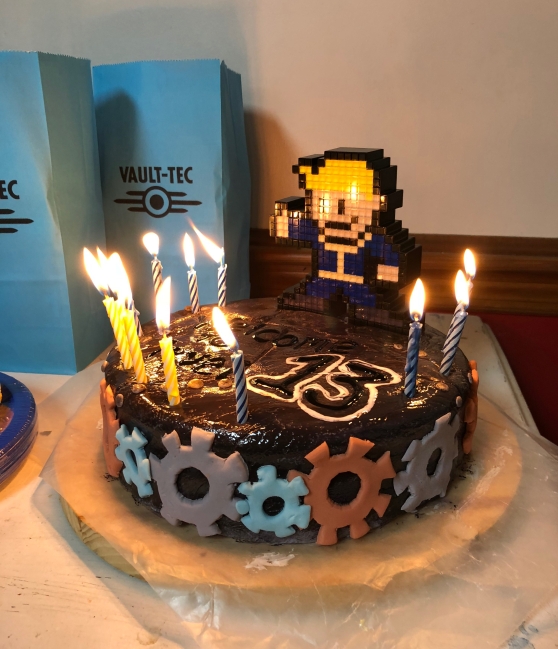 (Yes, yes, there are only 12 candles on this cake. I found one that rolled under the paper plates as I was cleaning up. Par for the course, I suppose. At least no one else noticed. So we’ll just keep this little blunder between us!)

7 thoughts on “I Fought the Devil: Lessons Learned by a Novice Cake Decorator”