Have I ever told you how stubborn I am?

This week has been a monster at work. Every single day has been a Monday. Long hours, skipped lunches and aggravating people have made for a very weary KJ so you’d think cooking supper in the evenings would be the last thing I’d want to do.

Monday evening, after a long, hard day at the office, I picked up my grocery order then went home and made lasagna. It was yummy. It was also easy – only 5 ingredients.

While putting up my groceries that evening, I actually thought ahead (for once) and set aside some Chicken and Sausage in the fridge so it wouldn’t be frozen when I cooked supper the next night. (You should be very proud of me, right now!)

Tuesday’s work day was horrendous. I mean HOR-REN-DOUS! My husband called me near the end of the day.

“When ya comin’ home?” He asked. I couldn’t give him a time.

“Don’t worry about cooking tonight,” he said. “We can just eat leftovers.”

Upon hearing those words, my overworked and frustrated brain went into overdrive. Does he really think I am required to cook for him every night? Why can’t he go home and cook supper for me? Oh, and leftovers? He really just offered me LEFTOVERS?!?

I was actually too tired to go full on “I am woman; hear me roar” and I suppose I gotta give him props for trying. Besides, I had unfrozen meat sitting in the fridge and a recipe already picked out. And dag-gummit! I was gonna cook!

The recipe was One-Pot Chicken and Dirty Rice by The Chunky Chef. Pinterest dubbed it as “Easy” which was good. I like easy. In fact, I need easy. Easy makes me happy and I was excited until I actually saw the recipe and the plethora of ingredients required.  Take a look:

Courtesy of The Chunky Chef

EASY???? With a list of ingredients like that, there’s no way this recipe could be easy! It certainly wasn’t gonna be “lasagna” easy.

But I still had my thinking cap on. When I ordered my groceries, guess what was on my list…

This eliminated almost half of the ingredients. Pretty smart, huh? 😉

As soon as I walked in the door after my long, tiring day, I hit the kitchen.

FIRST THINGS FIRST: marinate the chicken. Easy enough. SIDE NOTE: Though the recipe doesn’t call for it, doing this step the night before might have made the chicken even better. I didn’t do that. So much for planning ahead!

Now, let me remind you, the name of the recipe is “One-Pot Chicken & Dirty Rice”.

The chicken marinates in a bowl while the sausage is being browned in a Dutch Oven on the stove. Right off the bat, we have 2 dishes. 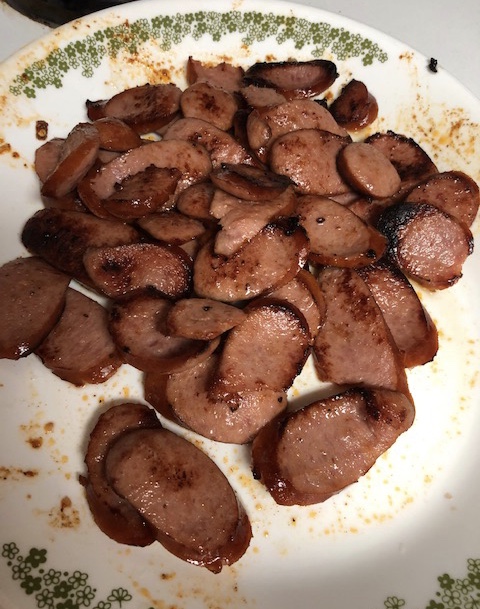 After browning, the recipe instructs to move the sausage to a plate (That’s 3 dishes, folks!) then to sear the chicken on each side and move it to the plate. Done and done. 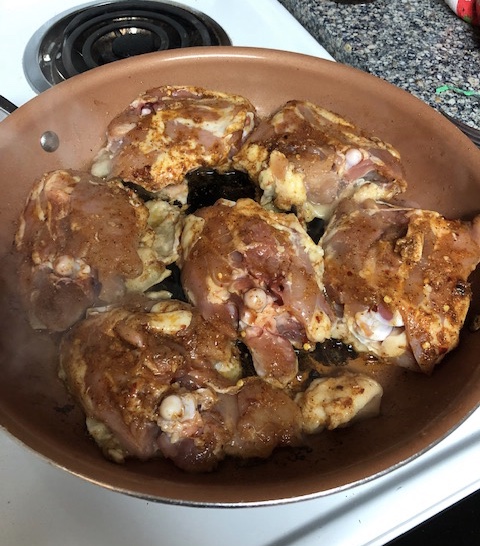 Before moving on to the rice, the recipe reads “use a paper towel to wipe out any black bits from the pan. Brown bits and pan drippings are good to leave in though.” Hunh? 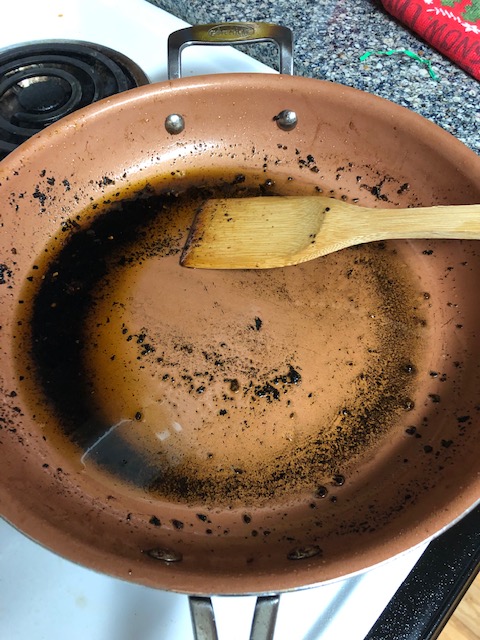 Everything in my pan was black bits! I had no idea what to do except wash out the pan and at this point, I truly wished I had taken my husband’s offer to eat leftovers. Ugh!

NOW FOR MY CHEAT: prepare the Dirty Rice mix. I followed the instruction on the box but only brought the rice to a boil because it cooks in the oven along with the chicken and sausage.

NEXT STEP: pop it all in the oven. Oh. The recipe instructs to add the chicken and sausage back into the pot and then place the pot in the oven to bake. Again, I was using a skillet so I transferred everything to a casserole dish. Are you keeping count? That’s dish number 4.

One hour later, it was 9 o’clock in the evening. My “One-Pot” dish was finally ready to eat and a stack of dirty dishes, pans, measuring cups and spoons was waiting on me to clean.

Oh, well.  At least my stubbornness paid off! This meal was DE-LI-CIOUS!

FYI, my week didn’t get any better. But Wednesday night, I did take my husband up on that whole leftovers offer! 😉